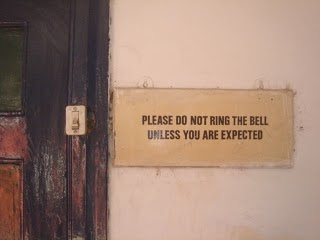 
"My earliest foray into the world of fiction was bragging, when I came home for vacations from England, of my exploits with English girls." - Khushwant Singh


Sir Mohan Lal looked at himself in the mirror of a first class waiting room at the railway station. The mirror was obviously made in India. The red oxide at its back had come off at several places and long lines of translucent glass cut across its surface. Sir Mohan smiled at the mirror with an air of pity and patronage.

'You are so very much like everything else in this country, inefficient, dirty, indifferent,' he murmured.

The mirror smiled back at Sir Mohan.

Sir Mohan threw out his chest, smoothed his Balliol tie for the umpteenth time and waved a goodbye to the mirror.

He glanced at his watch. There was still time for a quick one.
'Koi Hai !'
A bearer in white livery appeared through a wire gauze door.

'Ek Chota,' ordered Sir Mohan, and sank into a large cane chair to drink and ruminate.
Outside the waiting room, Sir Mohan Lal's luggage lay piled along the wall. On a small grey steel trunk, Lachmi, Lady Mohan Lal, sat chewing a betel leaf and fanning herself with a newspaper. She was short and fat and in her middle forties.


She wore a dirty white sari with a red border. On one side of her nose glistened a diamond nose-ring, and she had several gold bangles on her arms. She had been talking to the bearer until Sir Mohan had summoned him inside. As soon as he had gone, she hailed a passing railway coolie.

'Where does the zenana stop ?'
'Right at the end of the platform.'
The coolie flattened his turban to make a cushion, hoisted the steel trunk on his head, and moved down the platform. Lady Lal picked up her brass tiffin carrier and ambled along behind him. On the way she stopped by a hawker's stall to replenish her silver betel leaf case, and then joined the coolie. She sat down on her steel trunk (which the coolie had put down) and started talking to him.

"Are the trains very crowded on these lines ?"
'These days all trains are crowded, but you'll find room in the zenana.'
'Then I might as well get over the bother of eating.'
Lady Lal opened the brass carrier and took out a bundle of cramped chapatties and some mango pickle. While she ate, the coolie sat opposite her on his haunches, drawing lines in the gravel with his finger.

'Are you travelling alone, sister ?'
'No, I am with my master, brother. He is in the waiting room. He travels first class. He is a vizier and a barrister, and meets so many officers and Englishmen in the trains - and I am only a native woman. I can't understand English and don't know their ways, so I keep to my zenana inter-class.'


Lachmi chatted away merrily. She was fond of a little gossip and had no one to talk to at home. Her husband never had any time to spare for her. She lived in the upper storey of the house and he on the ground floor. He did not like her poor illiterate relatives hanging around his bungalow, so they never came. He came up to her once in a while at night and stayed for a few minutes. He just ordered her about in anglicised Hindustani, and she obeyed passively. These nocturnal visits had, however, borne no fruit.

The signal came down and the clanging of the bell announced the approaching train. Lady Lal hurriedly finished off her meal. She got up, still licking the stone of the pickled mango. She emitted a long, loud belch as she went to the public tap to rinse her mouth and wash her hands. After washing she dried her mouth and hands with the loose end of her sari, and walked back to her steel trunk, belching and thanking the Gods for the favour of a filling meal.

The train steamed in. Lachmi found herself facing an almost empty inter-class zenana compartment next to the guard's van, at the tail end of the train. The rest of the train was packed. She heaved her squat, bulky frame through the door and found a seat by the window. She produced a two-anna bit from a knot in her sari and dismissed the coolie. She then opened her betel case and made herself two betel leaves charged with a red and white paste, minced betelnuts and cardamoms. These she thrust into her mouth till her cheeks bulged on both sides. Then she rested her chin on her hands and sat gazing idly at the jostling crowd on the platform.
The arrival of the train did not disturb Sir Mohan Lal's sang-froid. He continued to sip his scotch and ordered the bearer to tell him when he had moved the luggage to a first class compartment. Excitement, bustle and hurry were exhibitions of bad breeding, and Sir Mohan was eminently well-bred. He wanted everything 'tickety-boo' and orderly. In his five years abroad, Sir Mohan had acquired the manners and attitudes of the upper classes. He rarely spoke Hindustani. When he did, it was like an Englishman's - only the very necessary words and properly anglicised. But he fancied his English, finished and refined at no less a place than the University of Oxford. He was fond of conversation, and like a cultured Englishman, he could talk on almost any subject - books, politics, people. How frequently had he heard English people say that he spoke like an Englishman !

Sir Mohan wondered if he would be travelling alone. It was a Cantonment and some English officers might be on the train. His heart warmed at the prospect of an impressive conversation. He never showed any sign of eagerness to talk to the English as most Indians did. Nor was he loud, aggressive and opinionated like them. He went about his business with an expressionless matter-of-factness. He would retire to his corner by the window and get out a copy of The Times. He would fold it in a way in which the name of the paper was visible to others while he did the crossword puzzle. The Times always attracted attention. Someone would like to borrow it when he put it aside with a gesture signifying 'I've finished with it.' Perhaps someone would recognize his Balliol tie which he always wore while travelling. That would open a vista leading to a fairy-land of Oxford colleges, masters, dons, tutors, boat-races and rugger matches. If both The Times and the tie failed, Sir Mohan would 'Koi Hai' his bearer to get the Scotch out. Whiskey never failed with Englishmen. Then followed Sir Mohan's handsome gold cigarette case filled with English cigarettes. English cigarettes in India ? How on earth did he get them ? Sure he didn't mind ? And Sir Mohan's understanding smile - of course he didn't. But could he use the

Englishman as a medium to commune with his dear old England ? Those five years of grey bags and gowns, of sports blazers and mixed doubles, of dinners at the inns of Court and nights with Piccadilly prostitutes. Five years of a crowded glorious life. Worth far more than the forty-five in India with his dirty, vulgar countrymen, with sordid details of the road to success, of nocturnal visits to the upper storey and all-too-brief sexual acts with obese old Lachmi, smelling of sweat and raw onions.

Sir Mohan's thoughts were disturbed by the bearer announcing the installation of the Sahib's luggage in a first class coupe next to the engine. Sir Mohan walked to his coupe with a studied gait. He was dismayed. The compartment was empty. With a sigh he sat down in a corner and opened the copy of 'The Times', he had read several times before.

Sir Mohan looked out of the window down the crowded platform. His face lit up as he saw two English soldiers trudging along, looking in all the compartments for room. They had their haversacks slung behind their backs and walked unsteadily. Sir Mohan decided to welcome them, even though they were entitled to travel only second class. He would speak to the guard.
One of the soldiers came up to the last compartment and stuck his face through the window. He surveyed the compartment and noticed the unoccupied berth.

'Ere, Bill, he shouted, 'one ere.'
His companion came up, also looked in, and looked at Sir Mohan.
'Get the nigger out,' he muttered to his companion.
They opened the door , and turned to the half-smiling, half-protesting Sir Mohan.
'Reserved !' yelled Bill.

'I say, I say, surely,' protested Sir Mohan in his Oxford accent. The soldiers paused. It almost sounded like English, but they knew better than to trust their inebriated ears. The engine whistled and the guard waved his green flag.

They picked up Sir Mohan's suitcase and flung it on to the platform. Then followed his thermos flask, briefcase, bedding and The Times. Sir Mohan was livid with rage.
'Preposterous, preposterous,' he shouted, hoarse with anger.
I'll have you arrested - guard, guard !'

Bill and Jim paused again. It did sound like English, but it was too much of the King's for them.
'Keep yer ruddy mouth shut !' And Jim struck Sir Mohan flat on the face.
The engine gave another short whistle and the train began to move. The soldiers caught Sir Mohan by the arms and flung him out of the train. He reeled backwards, tripped on his bedding, and landed on the suitcase.

'Toodle-oo !'
Sir Mohan's feet were glued to the earth and he lost his speech. He stared at the lighted windows of the train going past him in quickening tempo. The tail-end of the train appeared with a red light and the guard standing in the open doorway with the flags in his hands.
In the inter-class zenana compartment was Lachmi, fair and fat, on whose nose the diamond nose-ring glistened against the station lights. Her mouth was bloated with betel saliva which she had been storing up to spit as soon as the train had cleared the station. As the train sped past the lighted part of the platform, Lady Lal spat and sent a jet of red dribble flying across like a dart.